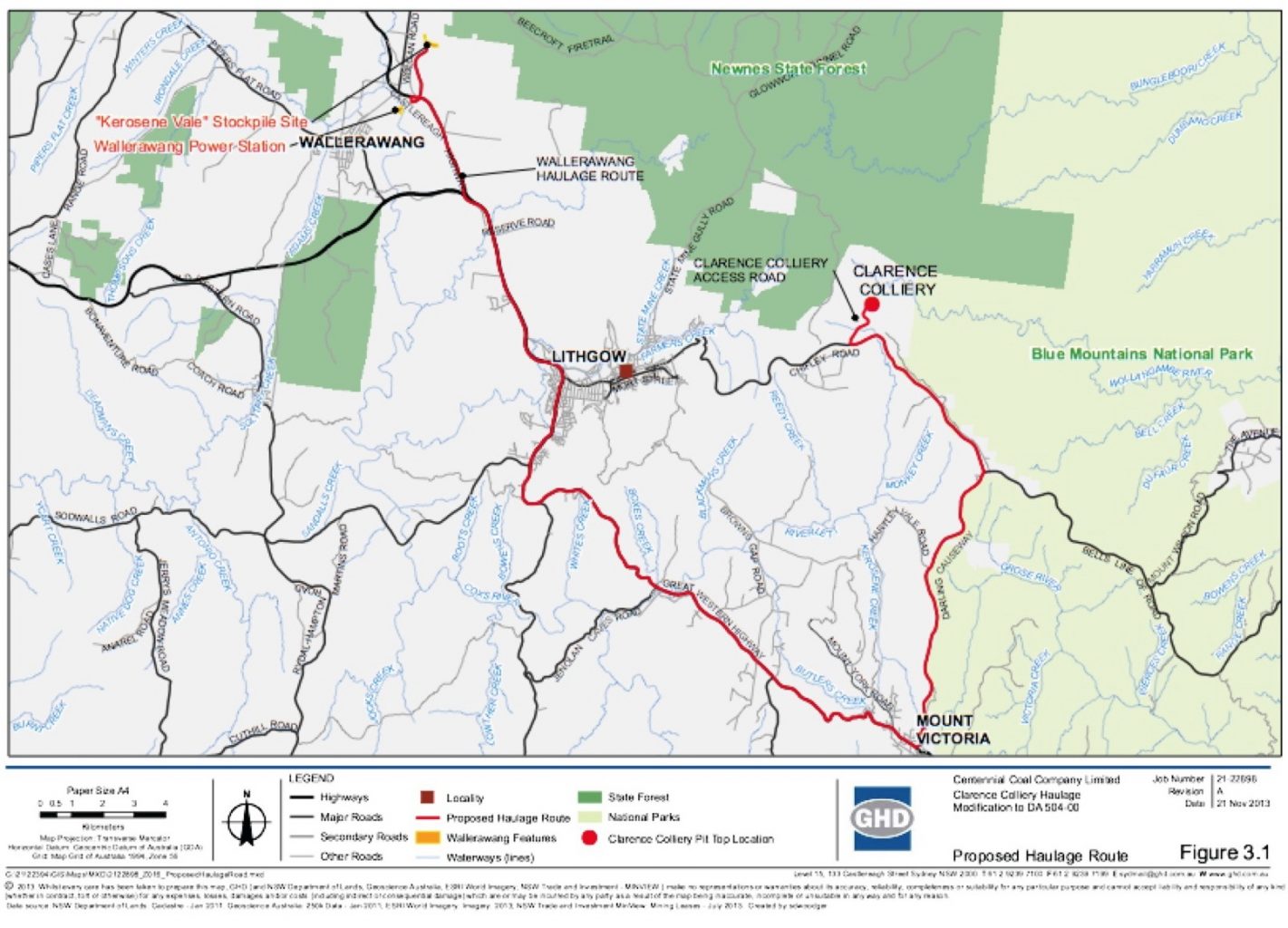 Centennial Coal Company Limited propose a modification of DA504-00 to enable the transport of coal products west of the Blue Mountains through the Lithgow local government (LGA) area via Mount Victoria.

Clarence Colliery is an underground coal mine located in the Western Coal fields of New South Wales (NSW).  Through its mining process, Clarence Colliery extracts and washes coal from the Katoomba Seam. By-products from the washing process include a coarse reject material and fine coal slurry. To separate the water and fine coal components of the slurry, Clarence Colliery has a Belt Filter Press (BFP) which recovers the solid fine coal creating a product that is saleable. This product is suitable to contribute to existing contracts in place with local energy providers.  EnergyAustralia have identified that the fine coal product can be utilised at the local power stations to cost effectively produce and supply electricity to their customers.  To this end, Centennial Coal Company Limited has explored available opportunities to transport the fine coal product to the local power station and has concluded that it can be cost effectively transported by road.

The existing consent for the operation of Clarence Colliery (DA 504-00) does not currently permit the transport of coal to the west through the City of Lithgow, without the prior consent from Lithgow City Council and to the satisfaction of the Director General of the Department of Planning and Infrastructure (DP&I).  However, the existing consent allows for the transportation of up to 200,000 tonnes per annum (tpa) to the east  Centennial Coal Company Limited is seeking to modify its development consent DA 504-00 to enable the road haulage of up to 100,000 tpa of coal  roducts to the west of the Blue Mountains through Lithgow via the Great Western Highway (ie. no coal products will be transported through the Lithgow CBD).

Coal products will be delivered to the Kerosene Vale Stockpile Site near Lidsdale to the north west of Lithgow, or delivered directly to local power stations. Coal product will still be transported to the east, the volume of which will be restricted to the remaining tonnage of up to 200,000 tpa dependant on volumes transported to the west. Haulage of coal products by Clarence Colliery to both the east and the west, will not exceed 200,000tpa in any one calendar year.

Haulage of coal products to the west will utilise vehicles of similar capacity to the existing fleet of haulage vehicles, with a maximum of 25 two-way truck movements (25 in / 25 out) per day.

It is important to note that the Project does not seek to alter the approved total road haulage volume and there will be no net increase in haulage from Clarence Colliery.  The proposed haul route will be via major arterial roads and private haul roads with sufficient spare capacity to accommodate additional truck movements associated with the Project.  Additional truck movements will result in a minor increase in noise emissions of up to 1.2 dB along some sections of the haulage route.  Noise emissions are predicted to be in accordance with the relevant consent criteria and Environment Protection Authority (EPA) guidelines and will have a negligible impact upon the amenity of the local community.

All other potential impacts are anticipated to be managed in accordance with existing site practices and the preparation of a Haulage Management Plan to guide the haulage operations.

The draft Haulage Management Plan is appended to this Environmental Assessment (EA).

Additional line marking and signage is also proposed to be undertaken to increase the safety and performance of the Wallerawang Power Station and Castlereagh Highway intersection.

All the above information is from Centennial Coal’s Environmental Assessment in seeking approval to haul coal through the Darling Causeway, Mt Victoria and Hartley by road.

Why they would rather go such a circuitous route when the train line would take the coal directly from mine to destination is baffling.

http://majorprojects.planning.nsw.gov.au/index.pl?action=view_job&job_id=6291
Now, had the RTA/RMS taken seriously the Hartley Community’s proposal to direct major truck traffic across the Newnes Plateau this crazy proposal would not have been necessary, would it?