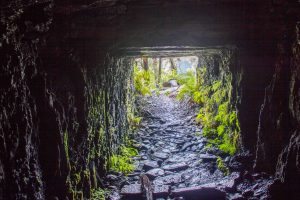 Looking out of Asgard Mine

This week the Hartley Hikers ventured further afield to visit the Asgard Mine at Mount Victoria. This old coal mine is built into a cliff line on the edge of the Grose Valley. There is also a kiln for producing coke although it looks never to have been used. The mine itself delves into the cliff line for only about 35 metres and is very stable. It is thought to have been built in the 1880s as one of six prospecting tunnels in the area. The kiln dates from a later time possibly when it was proposed to build a tramway to the site around 1908. Despite the mine being built by the man who was the local government inspector of mineral leases, a Dr W.F. McKenzie, there is very little documentation of its history. An archeological study in 1980 didn’t shed much more light on the subject.

The walk is 5.6km in total and there is a drop in elevation of about 220m along the way. Much of this is in the final approach 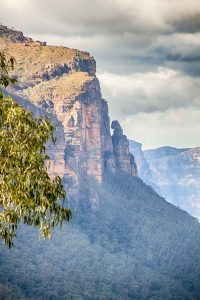 Grose Valley cliffs from Asgard Mine

to the mine and it is not for the faint hearted. . Outside the mine you are afforded some of the best views of the Grose Valley framed by large fern trees.

The Hartley Hikers are a group of local residents who meet for a short walk every Friday morning. Keep an eye out on this website or the Facebook page for upcoming walks.